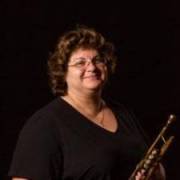 "Hailing from Moscow, Russia, Kira Shmeleva studied trumpet at the Gnessin Russian Academy of Music where she earned a Master of Music in Brass Performance.